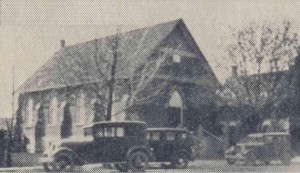 The History of Fraser Church, Tottenham

The Beginnings
Fraser Church began in the early 1800s when it wasn’t in Tottenham, wasn’t called Fraser, and wasn’t quite a church. Presbyterians from Ireland were among the earliest settlers of Tecumseth. They valued worship but had no house of worship as they began to clear their land and build log cabins. In the 1820s the nearest congregation they could join was over at the Scotch settlement in the neighbouring township of West Gwillimbury. (This was probably the first church of any denomination in Simcoe County and was organized in 1821 by the Rev. William Jenkins who served the Synod of the Canadas, a Canadian Presbyterian denomination  which was the forerunner of the United Presbytery, and later United Synod of Upper Canada). Rev. Jenkins traveled extensively in his ministry but only occasionally visited the small congregation. This continued until 1830 when the Rev. Peter Ferguson arrived from Scotland and was inducted to the charge by the United Presbytery in the spring of the following year. As the local population grew, the congregation was able to establish multiple meeting locations extending beyond West Gwillimbury. It was likely around this time that settlers in western Tecumseth  were blessed to have a minister regularly lead worship locally, laying the foundation for a future congregation.

The situation was looking promising for the Presbyterians in south Simcoe County until their new minister left in the spring of 1832 to serve another church in near Milton. The congregation then faced the problem of finding a replacement. By this time there was a theological debate in Presbyterian circles concerning the relationship between the church and state. While many Presbyterians were beginning to adopt the voluntary principle which opposed government funding, many others believed it was desirable for a church to receive money from the government. This debate divided the United Synod with the majority in favour of receiving government support. In fact, many believed they were being treated unfairly by the Upper Canadian government for not receiving a share from the clergy reserves with the Church of Scotland Presbyterians. In the United Synod, Rev. Jenkins and Rev. James Harris of York supported the volutarist cause.
The division affected the South Simcoe congregation. The members living outside of West Gwillimbury were voluntarists, whereas the majority living in the Scotch Settlement were not. As a result, the West Gwillimbury group voted to find a minister from the grant-receiving Church of Scotland. The remaining congregants then held their own meeting and voted unanimously to stay within the United Synod of Upper Canada which did not receive government funds. Despite this formal division, the two congregations shared the use of the original meeting house in the Scotch Settlement.

The voluntarist congregation then proceeded to seek their own minister. On October 9 of the following year, James Howey of Ireland was ordained and inducted to the charge. His ministry was very short, however, has he had contracted tuberculosis and became too sick to complete his first worship service. The congregation carried on without the services of their minister or any support from the United Synod which had begun to seek a merger with the Church of Scotland to qualify for government funds. It would be more than a year before help would arrive through another Presbyterian body, the Missionary Presbytery of the United Secession Church of Scotland. This small band of missionaries had originally planned to work with the United Synod of Upper Canada, but learning of its plan to join the Church of Scotland, they decided to form their own presbytery adhering to the voluntary principle. They began establishing congregations mostly west of Toronto but sent the struggling Simcoe County congregation two Nova Scotian missionaries in turn. On March 27, 1835, being appreciative of the support and in accordance with Rev. Howey’s dying request, the congregation voted unanimously to join the Missionary Presbytery. Two months later they sent a letter to the second missionary requesting that he return to become their minister. Although this meant giving up his original mission of reaching Gaelic-speaking Scots, he accepted the invitation and began serving the congregation on August 9, 1835. He settled near Bond Head and donated land for a new church and cemetery (with the original church later being sold to the Church of Scotland congregation). He was officially inducted on June 17, 1836 and soon organized the Presbyterians in West Gwillimbury, Essa, and Tecumseth into three congregations, including the church near Tottenham. That minister was the Rev. William Fraser.

The Place
Before a church was built in the Tottenham, worship was held at the home of James Ellison on the Second concession. But even after Rev. Fraser’s arrival, services took place there only once a month due to his other preaching responsibilities. After three new elders were ordained on July 12th, 1836, the Presbyterians in Tecumseth could finally make decisions and function as a distinct congregation. The church transitioned from monthly to weekly worship and within four years grew from 5 to 28 members. An acre of land was purchased on the 3rd Concession, just northwest of the Ellison home, and by the early 1840s a log church had been built. By 1856 the congregation’s growth justified becoming independent of its sister churches and forming into a single point charge, although it was soon linked to the new church in Beeton. A new frame church was constructed around 1860, which served the congregation until the move in 1881 to the current brick church in Tottenham. By the 1930s the church was raised to create a downstairs hall. In 2001 the back end was extended to increase the sanctuary and create a nursery space downstairs. The newest addition, an accessible entrance and lift, was added on the south side in 2014. However, the main structure from 1881 still stands as one of the older church buildings in New Tecumseth.

Former Ministers and Years of Service

The Rev. Jonathan Dennis has been the minister of Fraser Church since November, 2010.
Fraser Church has also been served through the years by a number of theology students and presbytery appointed ministers.